My trip to Tenerife: the perfect itinerary for first-time visitors!

In October I went to the beautiful island of Tenerife for the very first time. Having only visited Lanzarote before, I already knew the Canary Islands had a lot to offer in terms of impressive landscapes, but Tenerife still surprised me – in a good way of course! It offers a remarkable mix of beaches, forests and rugged volcano landscapes. Here’s why I think my Tenerife itinerary is ideal for first-time visitors!

On the first day of my journey I arrived at the airport of Tenerife South. The southern part of the island is the area where most of the all-inclusive hotels are. Due to the geographic positioning, this part of the island has the most sun. However I stayed in RIU Garoe, a hotel in the north. The area, to my surprise, looks a lot more lush and green than the south!

Although I’m not really a person that would normally enjoy a type of hotel like RIU Garoe, I was happy to be able to use their refreshing swimming pool and sumptuous buffet after a long day out and about in Tenerife. I discovered I’m one of those persons that tries a bit of everything all at once at the buffer. It all goes into the same stomach… right?

From the hotel you can head out to the quaint little town of Puerto de la Cruz and catch a sniff of the local atmosphere. You should definitely try out a seaside fish restaurant!

The local food was a nice bonus, but I didn’t travel all the way to Tenerife for the restaurants. On the first day I went for a hike at Anaga Rural Park with a guide from Anaga Experience. The road to Chamorga, the starting point of my hike, has a lot of ‘twisties’ so I imagine it would be awesome to ride a motorcycle there. On the way to I convinced my driver to stop at a place called ‘Camino Viejo al Pico del Inglés’, a hidden gem. This shows why Anaga Rural Park is a must-do for nature lovers: foggy tracks covered in shade, a surprising sight in Tenerife for sure. 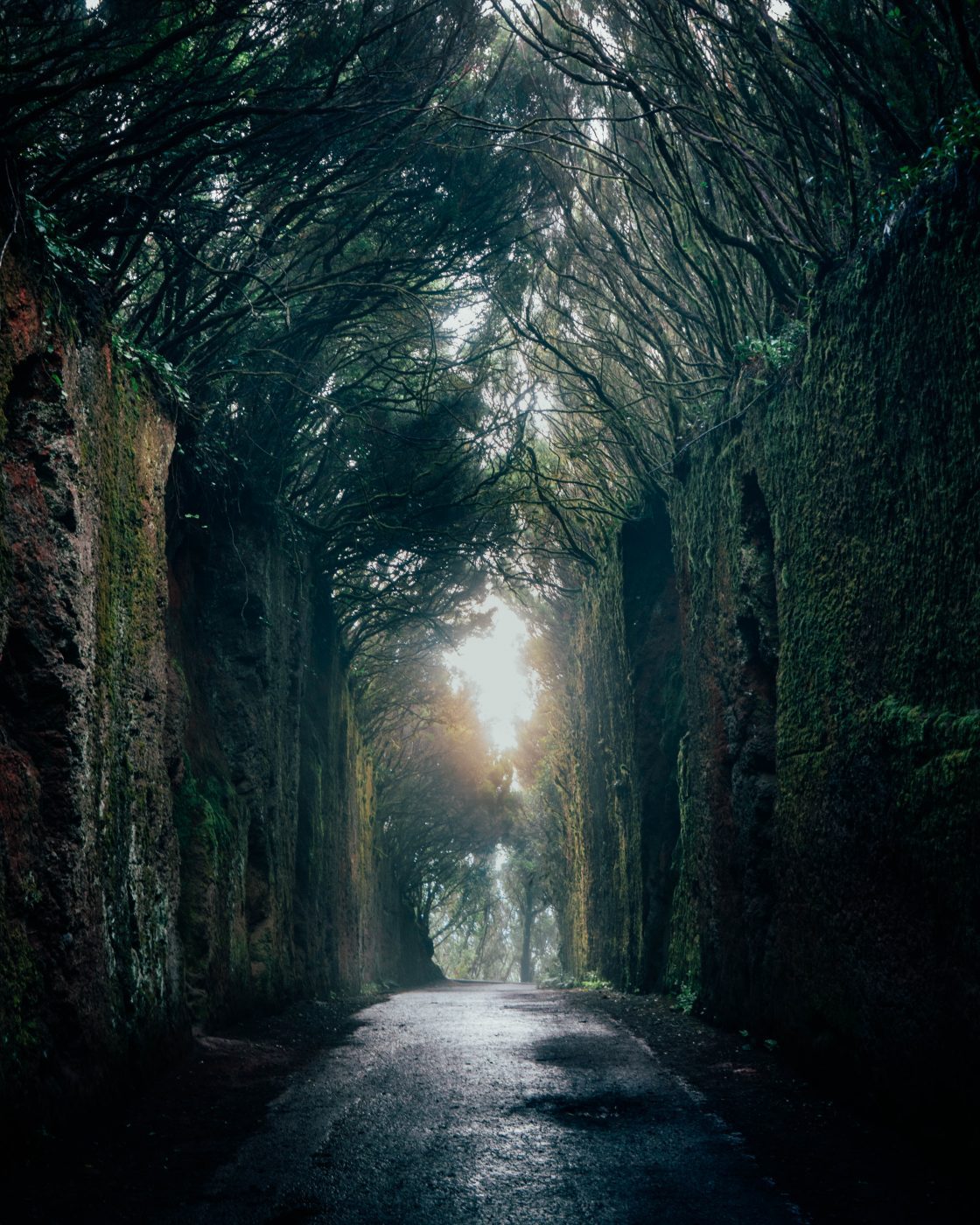 My hike from Chamorga to Roque Bermejo was sunnier, however. The dragon trees offered little shade and the goats I came across weren’t much of a help either. But the hike is really nice, I came across some man-made caves and abandoned structures. I ended the hike down at Roque Bermejo, a black sand beach near a hamlet far from society, where time appeared to stand still. I would have loved to take a dip in the crystalline water here, but I had to keep going. I returned by zodiac! The shipper dropped us off at Playa de las Teresitas near San Andres, where I did manage to have a little swim. What a day! 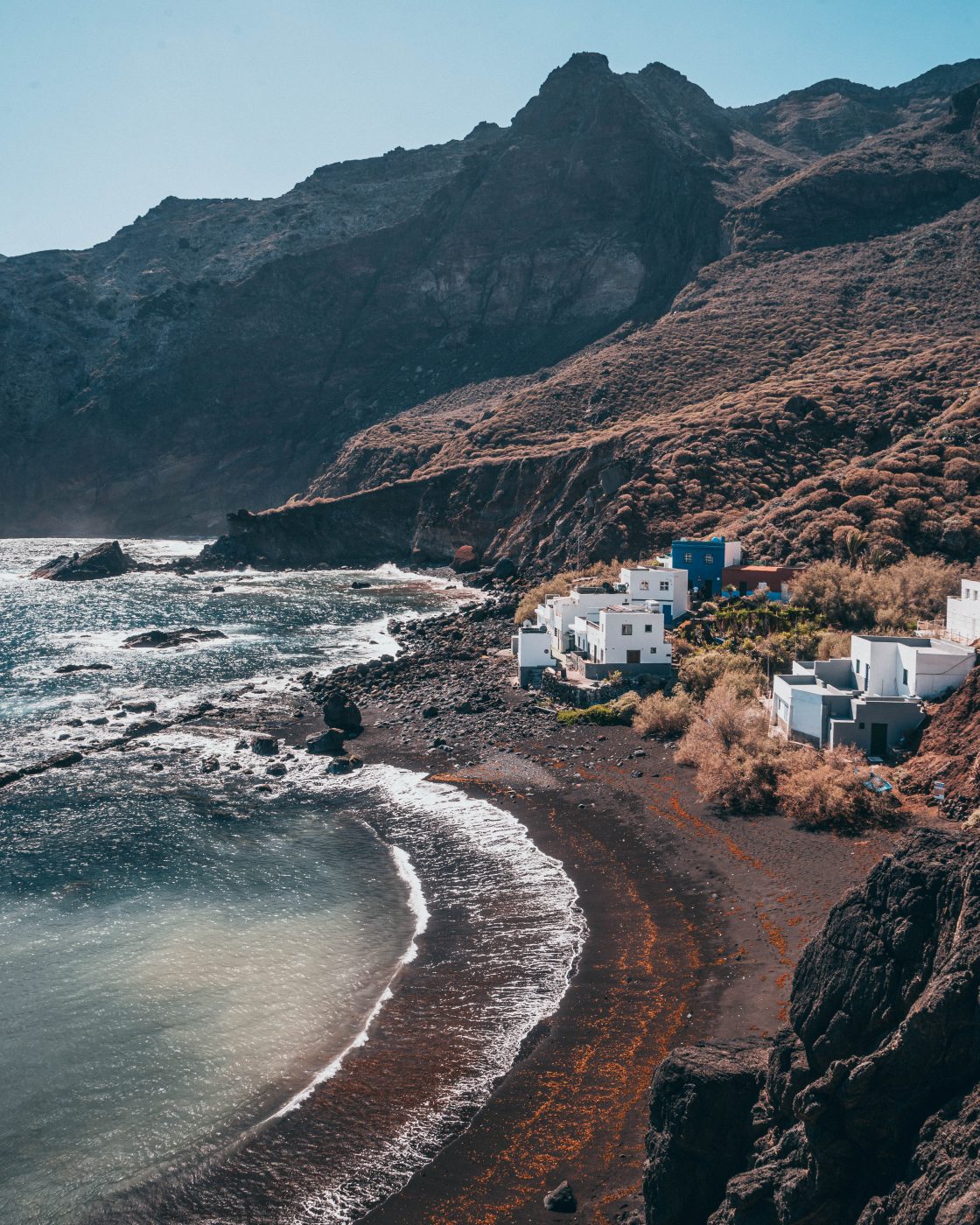 Day 3: Biking and kayaking during the day, stargazing at night

The next day I swapped my hiking boots for a mountain-bike. An electric mountain bike, and no it’s not because I’m lazy! I met up near Eco Museo de El Tanque with a guy from Bike Point Tenerife, who happened to be a fellow Belgian! Soon we head out for a bike trip through moonlike landscapes to Montaña El Chinyero. A total of around 30km was enough for me, because it gave me plenty of opportunity to stop and make pictures. 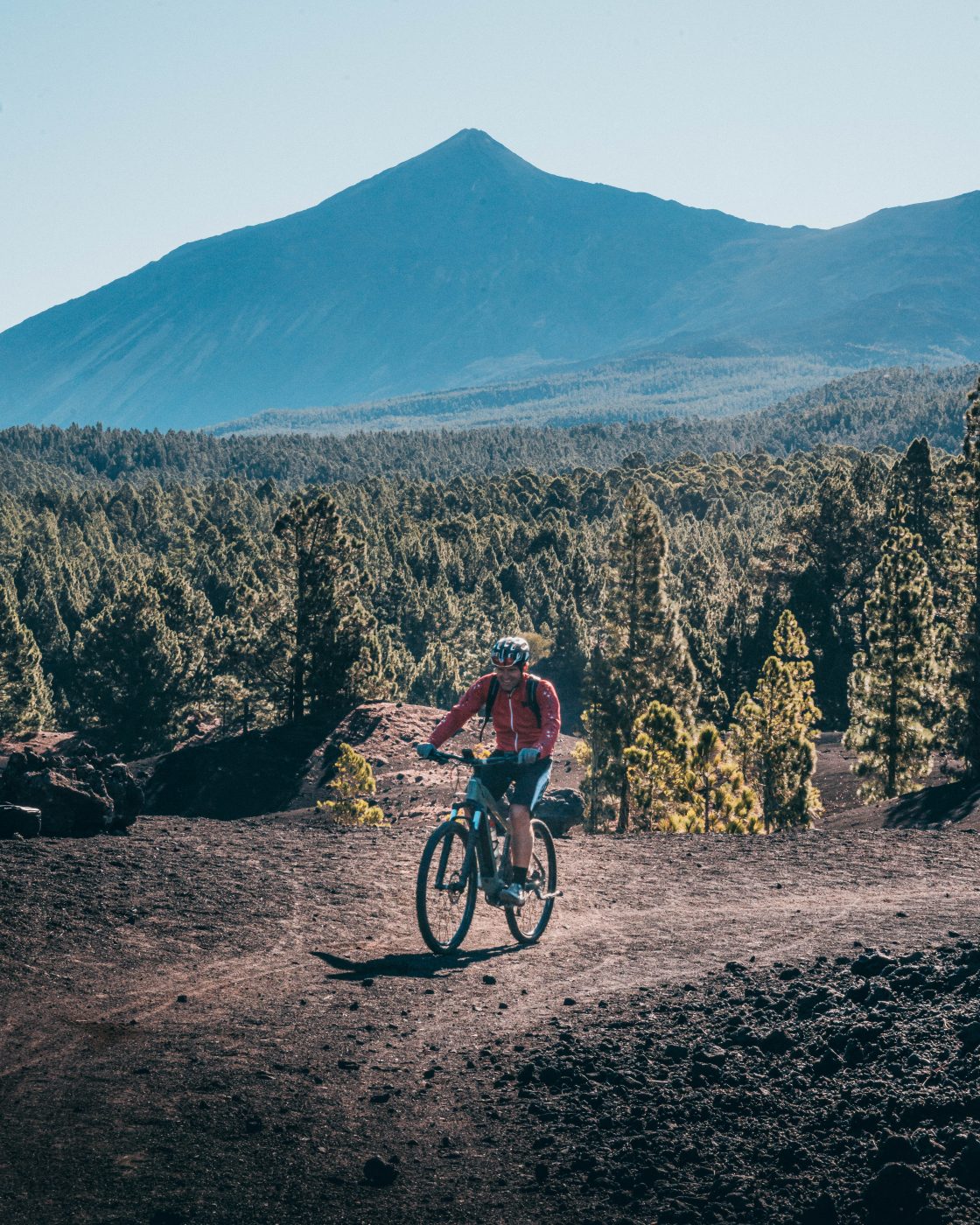 It was time for well-deserved lunch at Casona del Patio, a quiet hotel in the middle of nature perfect to escape from it all. I wish my trip was longer because I wouldn’t have minded staying here for an extra few days!

Though in the afternoon I wanted to go kayaking with Teno Activo. Location: Los Gigantes. From out on the sea you’ll be rewarded with unrivaled views of the largest cliffs in Europe. Here and there, you’ll find some secluded beaches which are ideal for snorkeling. 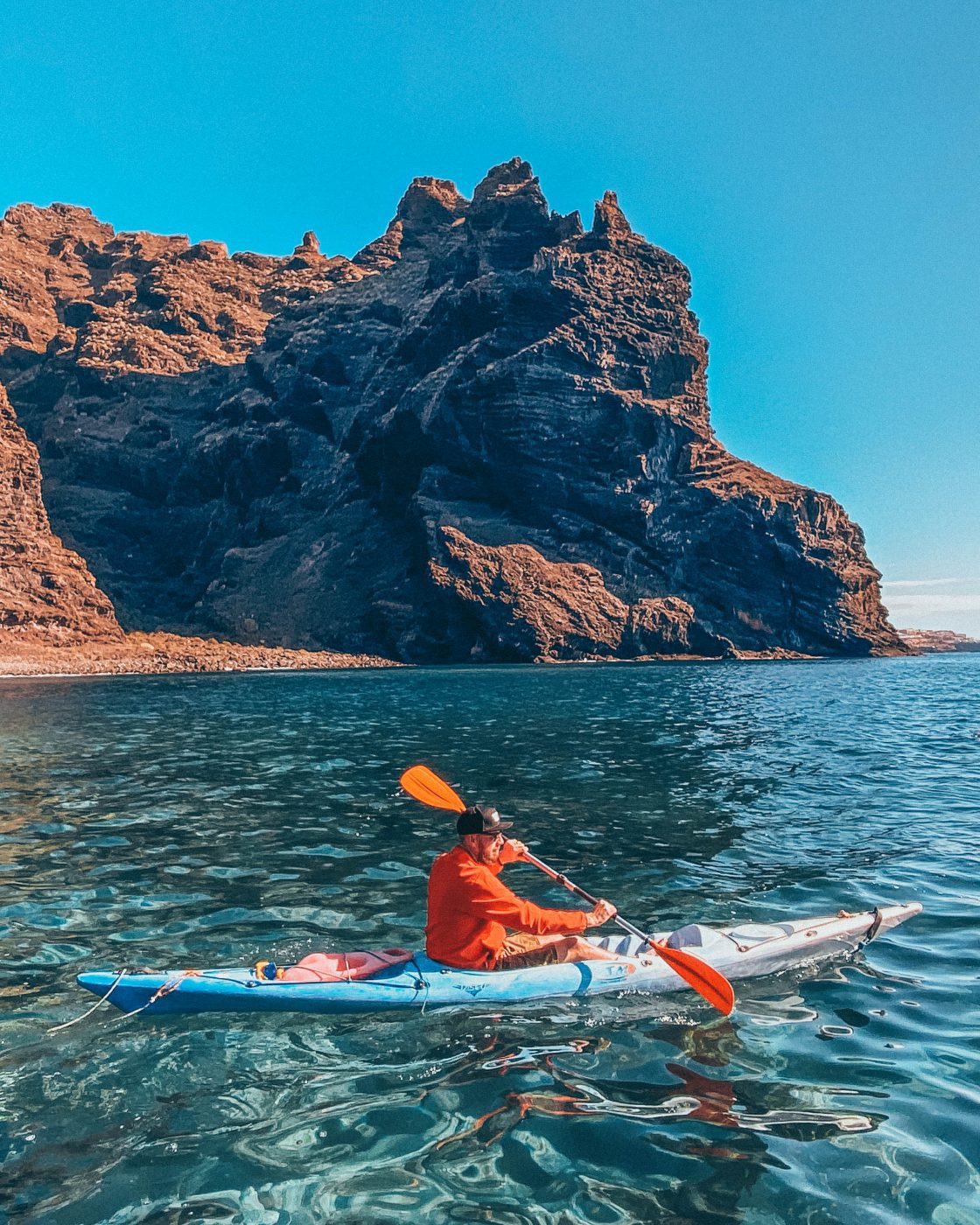 I’d say this is more than enough activity for one day, so it was time to leave for the final destination of the day: Teide national park. I stayed in the well-known Parador de Cañadas del Teide. Although restaurant service was painstakingly slow, I still recommend staying here for one night just because you’re so close to Roques de Garcia, a series of spectacular rock formations within the Teide National Park. Roque Cinchado is perhaps the most famous and most photographed rock on the Canary islands, but it’s a delight to see. The Parador is literally across the street so if you’re staying there you’re sure to be at Roques de Garcia during sunrise and sunset.

At some 2200m in altitude, you’re well above the clouds and the stars and milky way is clearly visible at night. It sure was chilly at night, still I head out to try some night photography, something I usually never do. I got some super useful tips from my fellow photographer Michiel Pieters, however I’m not too big to admit I still need some practice to get it right. It sure was fun and I’m happy with the result! 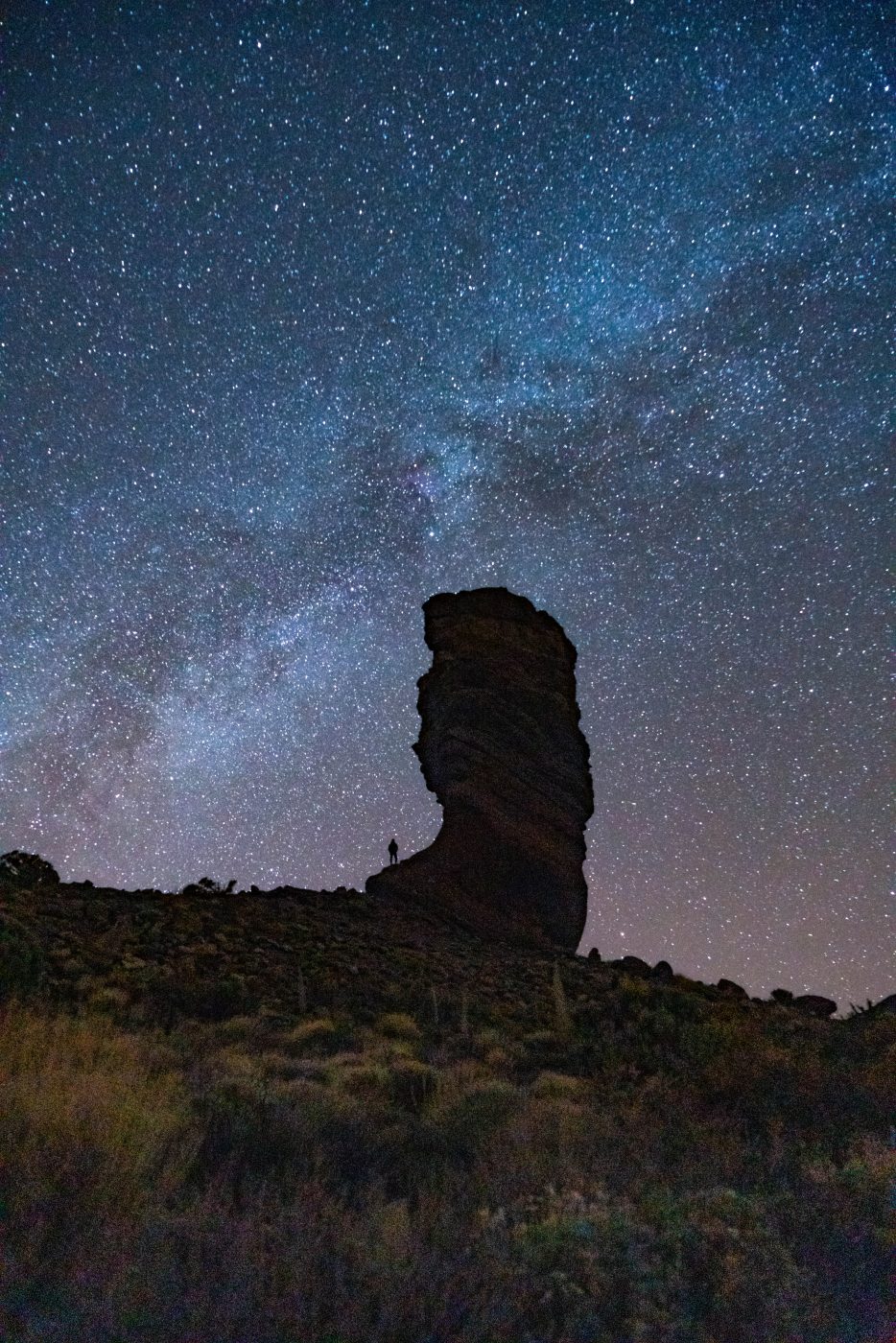 On day 4, I couldn’t get enough of these rock formations of Roques de Garcia so in the morning I did the loop trail around. Don’t be mistaken, it looks like you can complete the loop in about an hour, however it takes over 3 hours to get around. Definitely bring some water and sun block, because there are no shading opportunities! 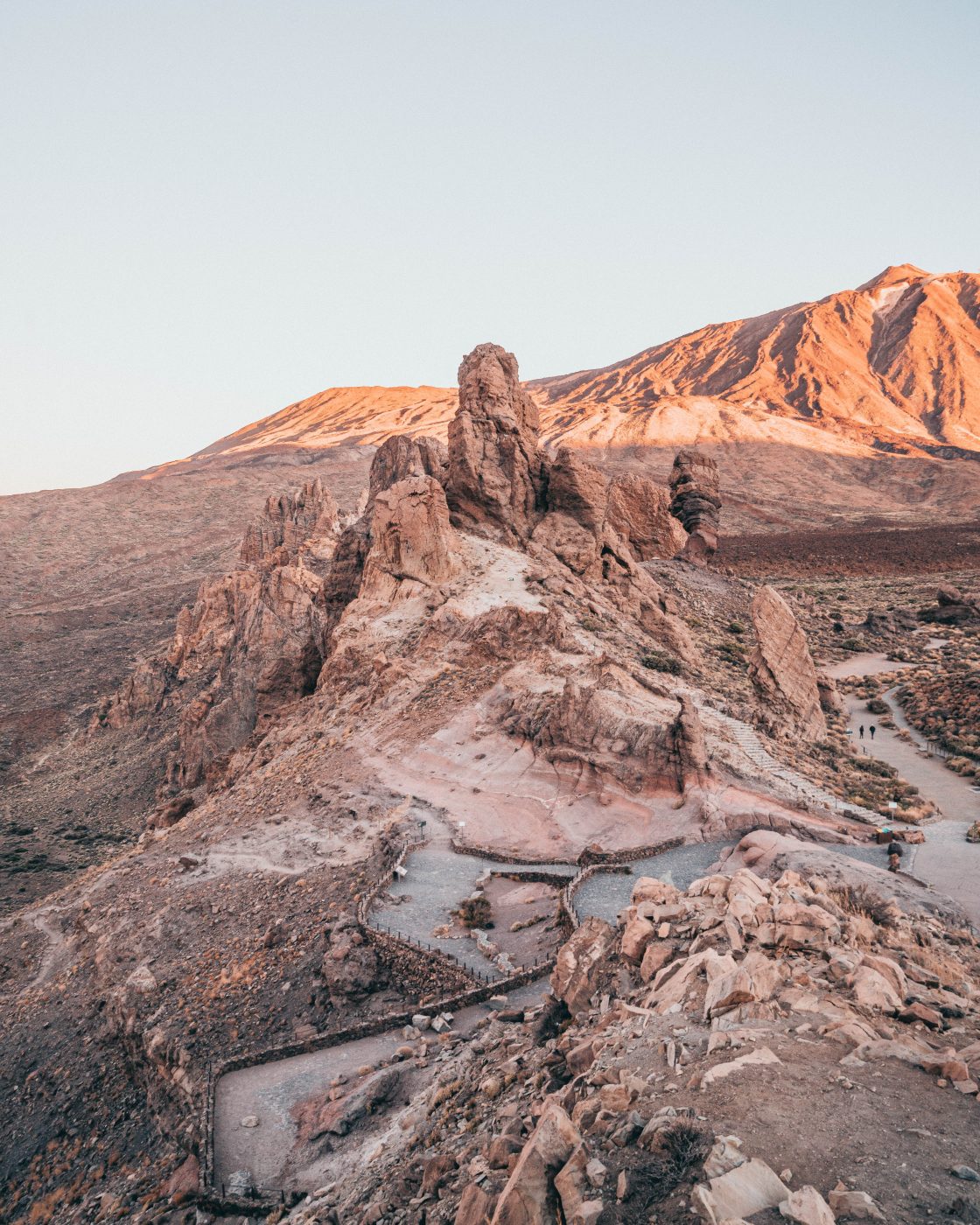 A bit further down from the Parador, there are some other nice trails to explore. Along these trails, you’ll be passing by cliffs which are popular for climbers and you’ll stumble across hidden pieces of paradise, like the one in the pic below. Isn’t this place amazing? 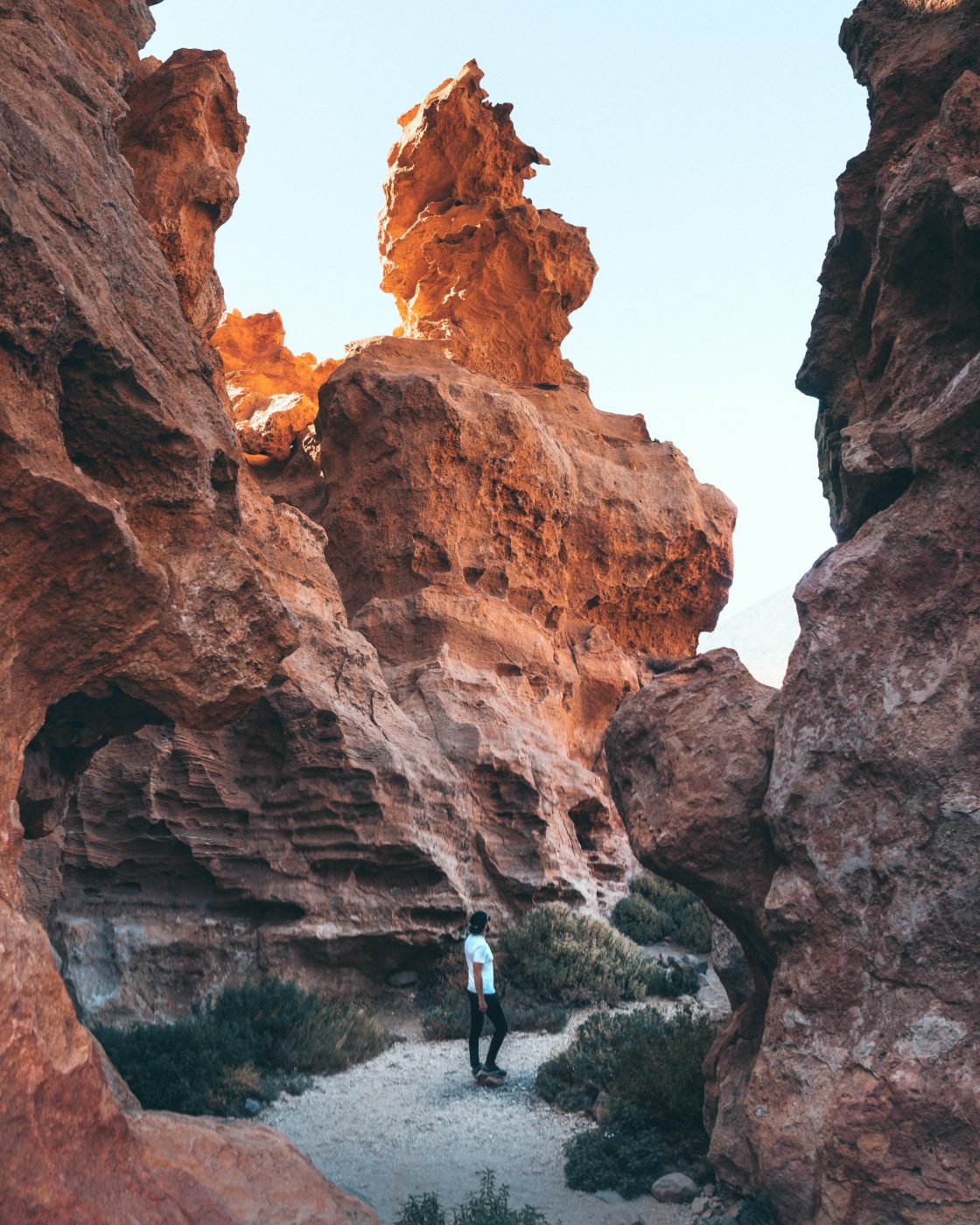 The last hotel of the trip was Hotel Jardin Tropical, in Costa Adeje. This is another all-inclusive resort, even more impressive than the previous! It has just completely been renovated and rebranded in 2021. I recommend you opt for a room with a sea view.

And so after 5 days my first trip to Tenerife came to an end. I really wish I could stay a bit longer, as there is so much more to explore in Tenerife and I barely scratched the surface of the jewel of the Canary Islands. I believe my itinerary can serve as a starting point for you, if you’re a bit on the adventurous side like me. Feel free to add some things of your own and I hope you enjoy your stay in Tenerife!